Wildlife Viewing in the Smokies 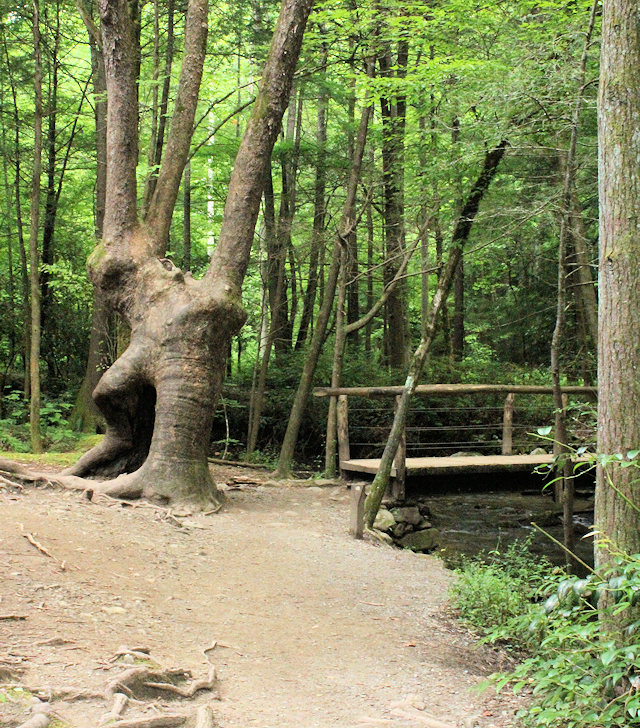 A trail scene from Cataract Falls in the Smoky Mountains.

The Great Smoky Mountains National Park does not recommend swimming in the streams. Visitors can explore at their own risk.

Stay away from fast currents and areas under waterfalls. Do not climb to the top of waterfalls. Deaths have occurred doing this. Cold mountain streams provide an increased risk of hypothermia, if you fall in.

Do not dive and take chances on getting a head injury. Severe injuries and deaths occur each year in the park by guests trying to explore rough and dangerous waters.

If you do get in a situation where you are being swept away by a fast current, try and float on your back, going with the flow. When you drag your feet, you risk getting them caught under something and having the force of the water shove you downward.

To be safe, only wade in very shallow pools with little if any current and no large rocks. Large rocks are extremely slippery. The Townsend Wye (pictured above) is a popular place to wade into a stream. However, you must watch the weather and be aware of flash flooding risks. Rivers and streams may rise quickly without notice, even if it’s not raining where you are.

Wildlife Viewing in the Smokies 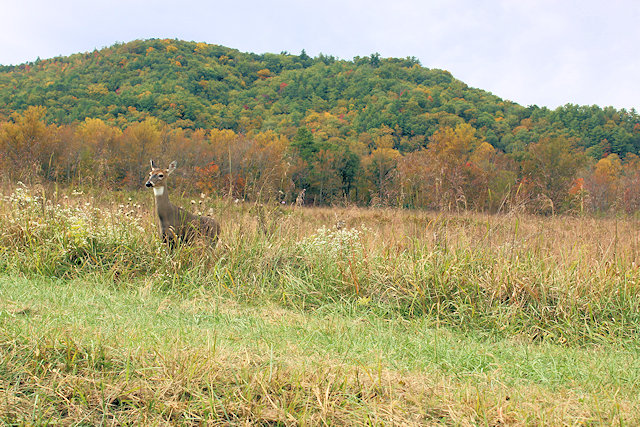 One of the most popular things to do in the Smoky Mountains is to view its vast array of wildlife in their natural setting. With all the scenic highways, picnic areas, and hiking trails, you are almost guaranteed to see some type of wildlife while in the Smokies.

The Great Smoky Mountains National Park does an excellent job of preserving and restoring wildlife within its park boundaries. There are excellent opportunities to view wildlife outside the park as well, but it is generally less developed in these areas. Your best chance to see animals in their natural habitat is to visit the national park or to get away from the tourist towns.

Wildlife viewing is seemingly limitless in the Great Smoky Mountains National Park. Most people travel to Cades Cove or Cataloochee or drive the Roaring Fork Motor Trail. The fertile valleys and open fields provide excellent opportunities for spotting a bear or deer.

Wintertime is always an excellent time to view wildlife because the trees losing their leaves clears up the dense portions of the forest where visibility can be difficult. The best wildlife encounters are often experienced while exploring the park’s backcountry on hiking and horseback trails. 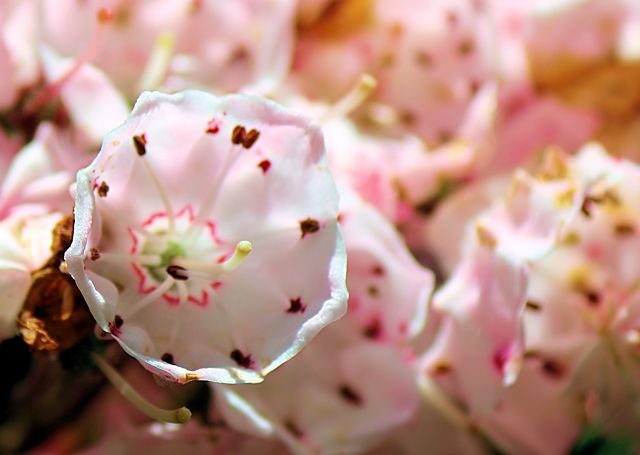 Mountain Laurel as seen along the trail to Alum Cave Bluff.

Biodiversity makes the Great Smoky Mountains National Park stand out from any other wildlife area in the United States. The area boasts over 17,000 different species, though scientist believe there are thousands more that have yet to be identified. The climate varies within the park and ranges from dry and humid to a cool and wet high mountain altitude.

The Smoky Mountain peaks have even been given the title of a temperate rainforest because of the higher than average rains and diverse range of species. Even if you don’t manage to see any animals, the park has over 1,600 different kinds of plants including wildflowers, shrubs, and trees to catch your eye.

If you do encounter any wildlife, make sure to give the animal room. Do not approach the animal or lure it with food. This can cause the animals to lose their natural instincts. They become unafraid of humans and become beggars for food instead of searching for it in the wild.

Feeding these animals is against the law. If you are too close to an animal, they will normally let you know by a natural process of changing direction, changing behavior, or stomping their foot on the ground. If this happens, begin to move away slowly while keeping an eye on the animal. Some of the more common encounters in the park include seeing black bear, deer, elk, turtles, salamanders, lizards, and snakes. 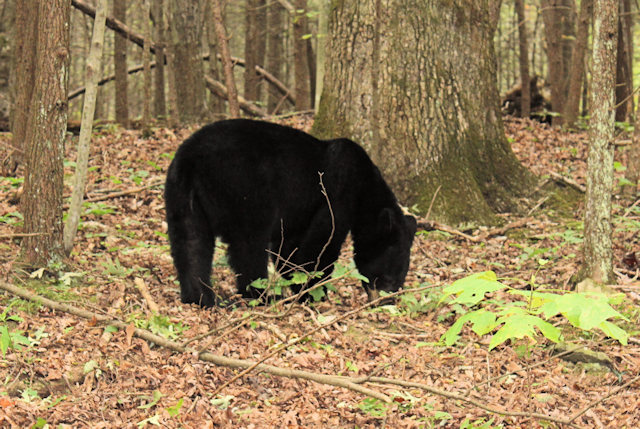 A black bear spotted on the side of the Cherokee Orchard Trail road in September 2012.

Scientists believe there are at least 1,500 black bear living in the park. This means that there are enough bear in the Great Smoky Mountains National Park to have a population of approximately two bears per square mile. Bears inhabit all elevations of the park.

They have a lifespan of 12 to 15 years; however, if a bear becomes dependent on human food and attempts to live off of garbage disposal, it may only live about half of that span.

Prolonged exposure to human food can alter the bear’s innate ability to hunt berries and insects. Most people come to the Smokies hoping to encounter a bear, but be sure to remain a safe distance away if you are fortunate enough to see one.

White tail deer are common in the Great Smoky Mountains National Park and in the wilderness area surrounding it. The white spots on their body help them to blend in with their environment in order to stay away from predators. They do sometimes fall victim to bears and bobcats within the park, however.

The national park itself protects deer from hunting or other human interaction. The park’s biodiversity of plants provides excellent food sources for the deer. They structure their eating habits and only eat the rarest or most delicious types of plants they can find, and if they are exhausted, they will sometimes eat common items. A deer will even eat poison ivy. 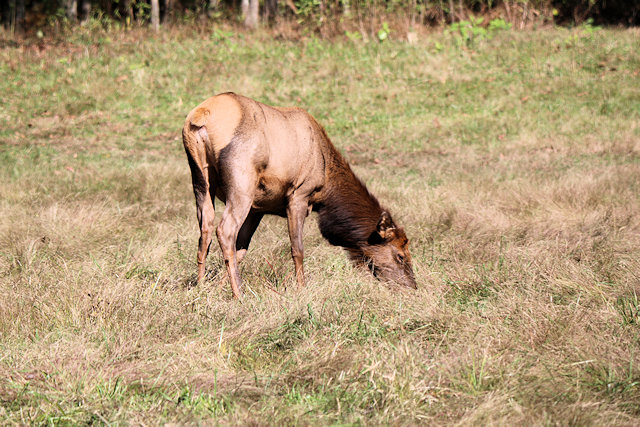 An elk calf in Land Between The Lakes National Recreation Area (LBL). Elk were introduced into the Smokies from LBL.

An elk calf in Land Between The Lakes National Recreation Area (LBL). Elk were introduced into the Smokies from LBL.

Elk are back in the national park. They were originally in the area before it became a park, but were over-hunted to extirpation. The park decided in 2001 to reintroduce elk to the area. Twenty-five elk were brought in from the Land Between the Lakes National Recreation Area on the Kentucky-Tennessee border from its Elk and Bison Prairie.

The elk were originally brought into Land Between the Lakes from the Rocky Mountains. The elk species that once roamed the lands of the Smokies and the flatlands of Tennessee and Kentucky were hunted to extinction. What was originally a 25-head herd of elk has grown to include over 100 today. After losing many calves to bear attacks, the elk eventually learned to protect themselves and adapt to their Smoky Mountain environment.

The Great Smoky Mountains National Park is the salamander capital of the world.
There are five families of salamander living in the park, each with different individual varieties. One family is the lung-less salamander.

This salamander has no lungs and breathes through the walls of small blood vessels located on its body and in its mouth. It is common to find salamanders near any wet area within the park.

The park is also home to many snakes, and they are located in all elevations. Only two types of the snakes found in the Great Smoky Mountains National Park are poisonous – the northern copperhead and the timber rattlesnake.

Cottonmouths are not native to the area, although sometimes park visitors mistake the average northern water snake for a cottonmouth.

Now Get Out There!

Besides all the types of wildlife mentioned here, the park is home to many other native species of wildlife. For a first-person encounter with some of the wildlife in the Smokies, a trip to the Great Smoky Mountains Institute at Tremont or the Appalachian Highlands Science and Learning Center is recommended for groups, school field trips, and other organizations.
Try sticking with local area tubing services and the routes they provide. If swimming in natural surroundings isn’t your thing, you can take a journey to a Smoky Mountain Waterpark (listed below) or enjoy the pool and hot tub at your local hotel or cabin.

Whatever you do, don’t be stupid. Think smart!

For more swimming information in the park, visit this link.

You can check out some of the Smoky Mountain area waterparks if you need a water fix!