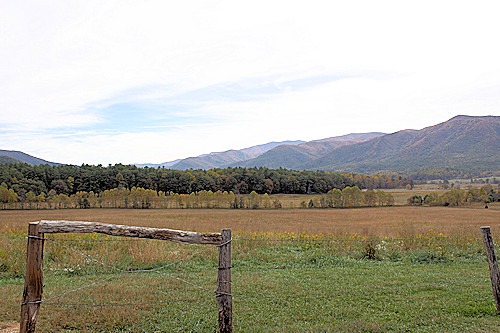 This beautiful meadow is one of the many highlights in Cades Cove.

Cades Cove in the Smokies

The Cades Cove loop auto tour is available from sunrise to sundown every day, opening late on Wednesday mornings at 10:00 a.m.  An 11-mile, scenic, one-way road winds through the cove and provides visitors with a way to view the local wildlife.  A common goal for many visitors is to spot a black bear along the tour.

In order to give bicyclists and pedestrians a chance to explore the cove without vehicle interaction, the loop does not open until 10 a.m. on Wednesdays and Saturdays.

Cades Cove is also home to the Cades Cove Riding Stables, which supplies horseback rides through the cove on designated trails.

Hikers can access Abrams Falls, Thunderhead Mountain and Rocky Top via numerous trails within the cove.  Overnight hikers will need to obtain a backcountry permit and reserve a shelter or campground.

Cades Cove is home to many buildings and structures used by early settlers, including log cabins, barns, churches, and mills.  Evidence of an old general store is there, as well as the remains of the homes of cove residents.  A visitor center is located near the old Cable Mill, one of Cades Cove’s most popular attractions.  Other structures of note within the cove include:

Cades Cove offers visitors a unique old-time experience.  If you plan on staying in the Cades Cove campground, reservations can be made by calling (877) 444-6777.  That same phone number applies to everything located in Cades Cove – from the horseback riding to even requesting a hay ride or carriage ride.