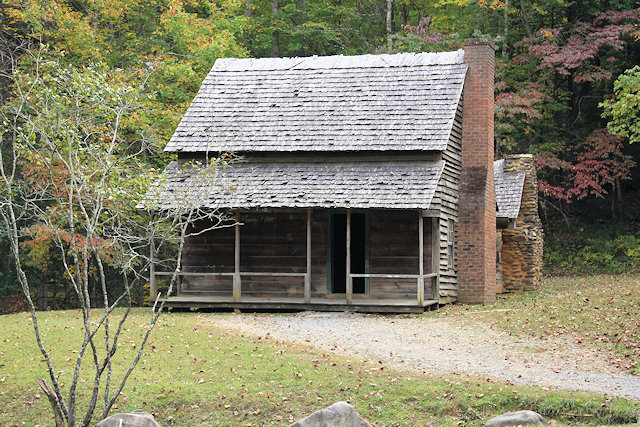 The cabin of Henry Whitehead in Cades Cove.

The origin of the Henry Whitehead Place actually begins with something of a rarity in the very religious Cades Cove – the separation of a husband and wife.  When Matilda Shields Gregory and her young son were deserted by her husband, her brothers responded quickly by building mother and son a cabin to stay in.

Unfortunately, the quick construction led to the cabin being one of the most poorly constructed in Cades Cove, featuring rough hewn logs and a chimney made of rubble.

As years passed, Matilda fell in love with widower Henry Whitehead.  After the two were married in 1898, Henry (perhaps out of of sympathy for his new bride having had to live in her previous dwelling) constructed the couple one of the nicest homes in Cades Cove.  For starters, the home featured a brick chimney, a real rarity in Cades Cove at the time, since making bricks was a fairly complicated process in those days.

The home was constructed of square-sawed logs, finely finished inside to make them smooth and attractive.  Square-log construction was naturally well-insulated by approximately four-inch thick walls and virtually no space between logs, so the cabin was especially warm by Cades Cove standards.

The Henry Whitehead Place is not only the only square-log home remaining in Cades Cove, it is also the only one left in the entire Great Smoky Mountains National Park.  It is considered a transition home between the early Cades Cove cabins and the more modern frame homes which would arrive in later years.  The home is located near Chestnut Flats.