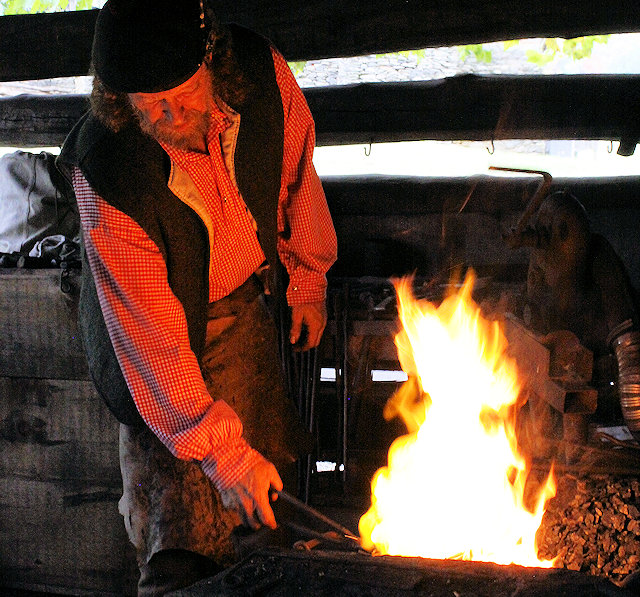 A blacksmith demonstrates his trade at Cable Mill in Cades Cove.

The Cherokee in the Smoky Mountains used two trails throughout the 18th century to cross the terrain from North Carolina to reach the Overhill settlements, which were former settlements located in what is now Tennessee.

The Indian Gap Trail connected the Rutherford Indian Trace in the Balsam Mountains to the Great Indian Warpath in present-day Sevier County, while the lower trail traversed what would become Cades Cove before proceeding along the Little Tennessee River.

Even prior to 1800, the Cherokee had established a settlement in Cades Cove known as Tsiya’hi (or “Otter Place”).  Although the Treaty of Calhoun in 1819 would end all Cherokee claims to the Smokies and Tsiya’hi would be abandoned, Cades Cove still derived its eventual name from the Tsiya’hi leader Chief Kade.

The first permanent Europen settlers in the area were John Oliver, a veteran of the War of 1812, and his wife, Lucretia Frazier.  The Olivers were originally from Carter County and were accompanied on their trip to settle in the valley in 1818 by another Carter County native, Joshua Jobe.

Jobe would later return to Carter County, but the Olivers would stay on and struggle through their first winter in the cove, subsisting primarily on dried pumpkin given to them by Cherokees in the area.  Jobe would return in the spring of 1819 with a herd of cattle in tow, giving the Olivers two milk cows of their own.

The population of the area further expanded in 1821 when Revolutionary War veteran William “Fighting Billy” Tipton bought up large tracts of the cove and sold them to his sons and relatives.  Between 1820 and 1850, the population of Cades Cove grew to 671, with the size of the local farms ranging from 150 to 300 acres.

Without the benefits of modern medicine, the life expectancy of a Cades Cove settler was approximately 45 years of age.  This may have been one of the primary reasons many settlers married as teenagers.  This practice gave rise the construction of “honeymoon houses,” which were often located on the parents’ property near the main house.

A honeymoon house served multiple purposes for young couples, including offering them a way to save money and start families before venturing out to purchase land of their own.  The houses also allowed parents to offer the young newlyweds instruction on the basics of life, such as cooking, farming, building, and raising children.

As with many of the western settlements at the time, Cades Cove residents had to provide nearly all their food, not just for themselves but also for their livestock.  Cabins and other buildings were built on slopes or hilly areas, saving the flat lands for crop production.

Although wheat was the first main crop to be harvested in the cove, corn emerged as the important crop, as it could be prepared by boiling, baking, frying, or drying.  The dependence on grain products, such as oats and rye, gave rise to local mills.  The self-sufficiency of Cades Cove residents could also be seen in the skills they developed in carpentry and blacksmithing.

Despite their pioneer spirit, however, Cades Cove did not shut itself off from the rest of the outside world.  The local community kept up with current events through newspapers merchants would bring in from Tuckaleechee (which is now the city of Townsend, Tennessee).

Cades Cove even had telephone service as early as the 1890s.  Traveling preachers (such as circuit rider George Eakin, who was likely instrumental in establishing the Cades Cove Methodist Church in the 1820s) were also no strangers to the area. Since Tuckaleechee was only an approximately three-day journey back and forth to Cades Cove, merchants were commonly seen bartering for different products and services.

While Eakin may have been associated with bring the Methodist denomination to Cades Cove, the predominant church there in the 1800s was the Baptist church.  John and Lucretia Oliver organized a branch of the Miller’s Cove Baptist Church for Cades Cove in 1825.

The end result of the dispute saw 13 members of the Cades Cove Baptist Church departing to form the Cades Cove Missionary Baptist Church.  The remaining congregation changed its name to the primitive Baptist Church in 1841.  While the Missionary Baptists continued to meet intermittently throughout the 19th century, the Primitive remained the dominant religious force in the cove, with their meetings being interrupted on by the events of the Civil War.  Both Baptist churches and the Methodist church are still standing in Cades Cove today.

Cades Cove is located in Blount County, Tennessee, which was home to an abolitionist movement so strong in 1800s the county actually fought alongside Union forces in the Civil War.  Reverend Isaac Anderson, a staunch abolitionist who would become the founder of Maryville College, often gave sermons in Cades Cove, and Dr. Calvin Post was believed to have set up an Underground Railroad stop there in the years preceding the war.

It is no surprise, then, that Cades Cove remained pro-Union as well, although its allegiance would cost the area dearly.  Confederate bushwhackers from Hazel Creek and other parts of North Carolina began conducting raids into the cove, stealing livestock and killing any Union supporters they could find.

Elijah Oliver, the son of John Oliver and a Union sympathizer, actually had to hide out on Rich Mountain for much of the war.  With Post also in hiding and the death of John Oliver in 1863, the cove had lost most of its original leaders.  Cades Cove would suffer effects from the Civil War for most of the 19th century, as its population did not return to pre-war levels until the early 1900s and its economy did not recover until the Progressive Era was underway.

The turn of the century would find the economic emphasis of Cades Cove turning from agriculture to logging.  As logging companies established base camps, local citizens were employed and the entire cove became dependent on the outside world for basic items again, marking a shift from the isolationism which had defined the area in the years following the Civil War.  While logging reinvigorated the local economy, it also led to massive deforestation.

Eventual efforts to include Cades Cove into the Great Smoky Mountain Park were met with great resistance by the cove’s residents, prompting the Tennessee General Assembly to grant the Park Commission the authority to seize properties within the proposed park boundaries by eminent domain.

Despite the eventual departure of all the local residents, the Primitive Baptist Church continued to meet in Cades Cove until the 1960s in defiance of government development.  The last surviving member of the Cades Cove community, Kermit Caughron, passed away in 1999.

While most of the modern structures in Cades Cove were eventually torn down, the more primitive structures which were indicative of pioneer life in earlier Appalachia were allowed to remain.  These structures can still be visited today within the Cades Cove area.  The cove is still home to the wildlife of the Smoky Mountains as well.  To explore more on the history of Cades Cove, visit History of the Smokies, and also be sure to take a virtual tour of Cades Cove.